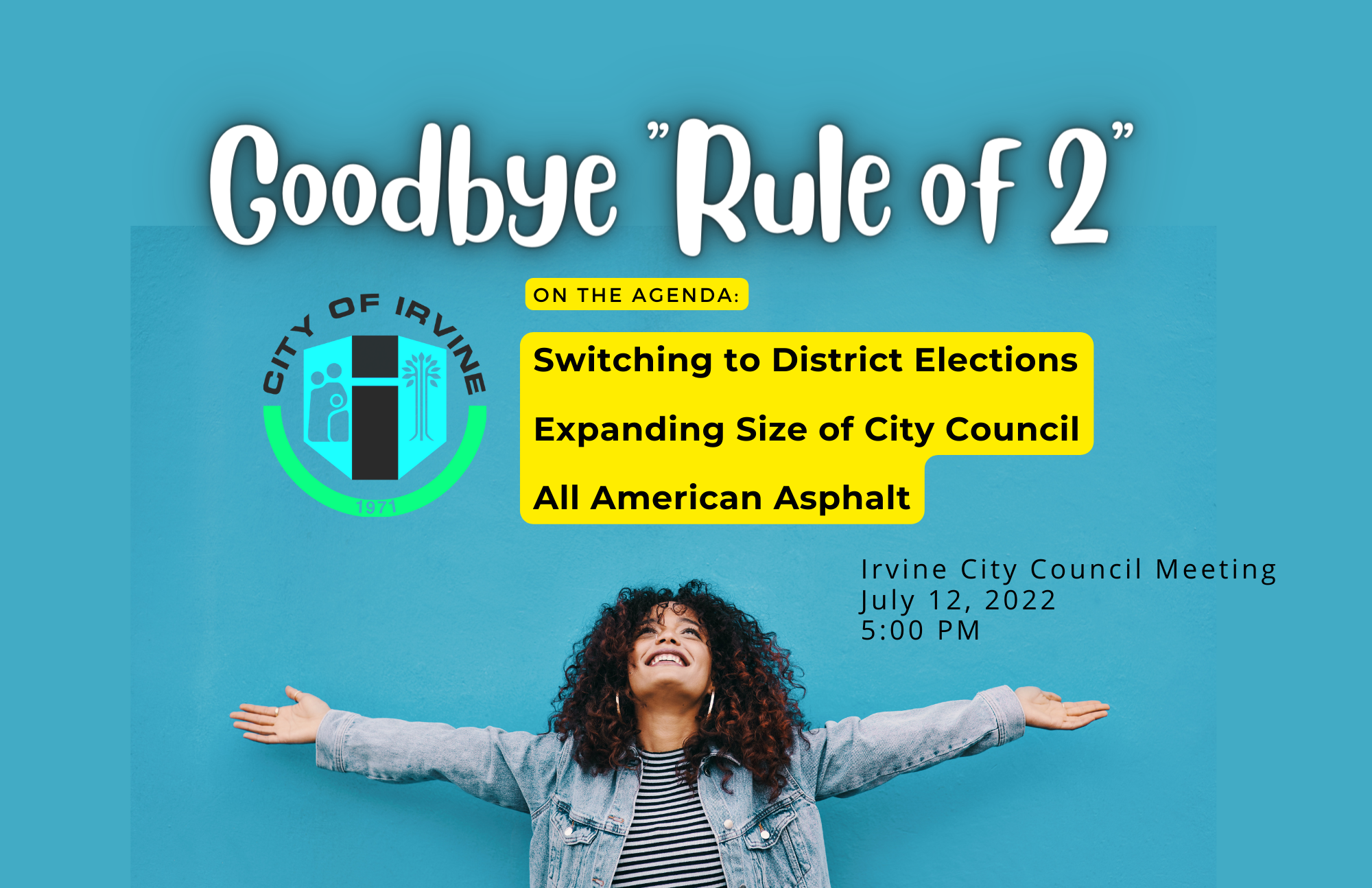 The controversial “Rule of 2” agenda-setting policy has been the bane of numerous Irvine residents for the past year and a half. This “Rule of 2” policy was used to deny over 15 requests to agendize everything from recognizing October as Children’s Environmental Health Month to a comprehensive discussion on the Orange County Power Authority — all requested by Councilmember Larry Agran. But the days of being denied a public discussion on items are no longer.

At the June 28, 2022 City Council meeting, Councilmember Tammy Kim led the discussion on what she agendized as a revision to the “Rule of 2” and started off by stating,

Kim’s entire introductory comments can be heard in the video below:

However, Mayor Khan stated, “I’d much rather support removing it fully” and by the end of the discussion, without any opposition, the City Council unanimously voted to revoke the “Rule of 2” altogether and return to the agenda policy Irvine utilized for its first nearly 50 years. Just like that, the “Rule of 2” was quietly removed from our city’s policy.

This was in stark contrast to Kim’s position when adopting the policy over a year and a half ago. At the December 8, 2020 meeting, Kim showed her support for the policy, stating:

“I’ve been giving this a lot of thought… It’s still not really clear to me how this is somehow oppressing minority voices in some ways, especially when we have 3 out of the 5 councilmembers that are people of color from multicultural and diverse communities.”

Listen to Councilmember Kim’s remarks in support for the “Rule of 2” from December 2020 in the video below:

“The rule was originally implemented nearly three years ago to stop then-Councilwoman Melissa Fox from agendizing items, at the same time half a dozen other cities implemented similar policies that cut down on debate.”

“While the rule was originally set to sunset after the 2020 election, the city council voted to make it permanent almost immediately after they were elected in December of that year, with Councilman Larry Agran the only voice against it.”

“While Agran has publicly campaigned against the rule in almost every city council meeting since then, no one else has jumped on board until now to get rid of the rule. At the time, the council majority spoke favorably about the move at the December 8, 2020 meeting.”

The agenda-setting policy “Rule of 2” change was adopted at the very first City Council meeting immediately following the Swearing-In Ceremony in a 4-1 vote (Yes: Khan, Kuo, Carroll, Kim; No: Agran) despite numerous members of the public who opposed this policy. (See public comments from December 8, 2020 meeting.)

The Memo dated November 12, 2020, was hastily submitted just 9 days after the November election. It’s noteworthy that Khan and Kuo requested the item be placed on the November 24, 2020 City Council meeting agenda before even being sworn in, which would have precluded Councilmembers Larry Agran and Tammy Kim from being able to vote on the item. The swearing-in ceremony was on December 8, 2020, and the item was instead placed on the first City Council agenda on the same day, with the newly elected Councilmembers seated.

Why was such a vastly controversial item placed on the agenda with such haste and given such priority?

Listen to Mayor Farrah Khan’s remarks in support of “Rule of 2” from December 8, 2020 meeting or read transcription below. The entire meeting video can be viewed here.

“I really feel that, you know, this council does better when it’s able to work together. It does better when it’s able to kind of understand what some of our preferences are, whether there’s issues that we care deeply about, and kind of helps us work in a manner that kind of brings this council together. So for me, I support this item. Because I feel that in the past, it has helped me get to know my council members a little better. It’s kind of helped me get to work with them a little bit more. And at the end of the day, you know, if a council member is unable to get a second, they’re always able to bring the item forward during announcements in order to put it on the agenda. So it’s not restrictive, and it is not taking much away from the opportunity of bringing items forward.”

Now, 19 months later, Mayor Khan no longer had any praise for the policy, calling instead for it to be removed entirely. According to the Voice of OC, “Khan did not respond to requests for comment on what changed her mind, and the council voted unanimously to repeal the rule.”

With the abrupt unanimous vote, the policy was rescinded on the spot.

Thanks to the death of the “Rule of 2” policy, two important items that Councilmember Agran had made multiple attempts to agendize will be on the Council meeting agenda for the first time — a status update on the All American Asphalt plant (item 3.3) and a discussion to transition from at-large to district elections and expanding the size of the City Council (item 3.4).

All Irvine Watchdog articles on All American Asphalt can be read here.

All Irvine Watchdog articles on District Elections and Council Expansion can be read here.

For information on how to participate in this Tuesday, June 12, 2022 City Council meeting at 5:00PM, click here.

Correction: The two links under Councilmember Agran’s attempt to agendize District Elections has been updated with the correct information and links.