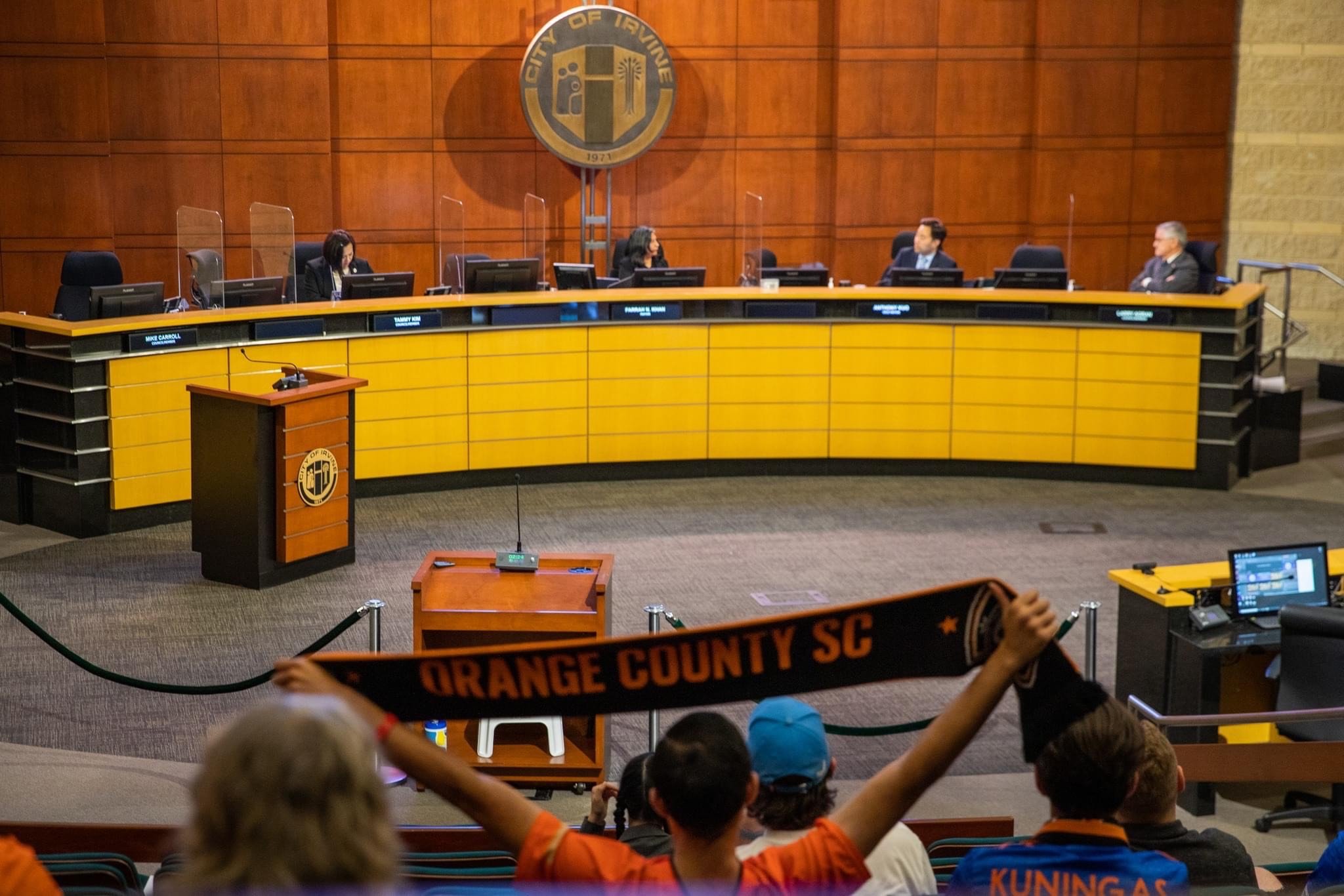 Orange County Soccer Club (OCSC) lives to see another season at The Great Park in Irvine. Beyond, the 2023 season, it’s unclear where this defending national championship pro soccer team will play.

The Irvine City Council, on September 13, 2022, voted 5-0 on Agenda item 4.5 to extend OCSC’s use of Championship Stadium for one more year and to concurrently engage in negotiations for a potential long-term stay at the stadium. This discussion was prompted by the prospect of Irvine negotiating an exclusive deal with the Los Angeles Galaxy soccer franchise, effectively “evicting” OCSC at the end of their current contract with the stadium this November.

Leading up to Tuesday’s meeting, and in stark contrast to the 100 public comments and packed City Hall auditorium last month, OCSC president of business operations Daniel Rutstein, affectionately called “English Dan” by supporters, encouraged fans to not overwhelm council with public comment. Rutstein, representing the large fan base, provided public comment in eloquent fashion, calling on the city for assurances on the next season while they engage in negotiations.

It appears Rutstein and OCSC got their wish. But not without being chastised by City Councilmember Anthony Kuo. Kuo began by stating, “A lot of the rhetoric, a lot of the messaging has been very accusatory, very impolite, and I think in many ways, based on intentionally getting people excited.” He continued, “Let me say that, as for me, I have personally had at least three of four conversations in the last month with representatives of the soccer club. So to suggest there is no dialogue is not true.”

Councilmember Tammy Kim, quiet about OCSC up to this point, chimed in. “I want to make it very clear. I have received so many nasty emails from the fans. And honestly, I feel like I have been supportive. I have not done any backroom deals. I am not corrupt…I need you guys to reflect and think about the words you use in accusing myself and my colleagues about awful things. To be honest, I don’t know enough about soccer to be corrupt even if I wanted to be.” It is unclear what comments and from who Kim is specifically referring to. However, it appears Rutstein’s conciliatory comments are moving negotiations forward in a respectful manner with the City.

Councilmember Mike Carroll spontaneously directed staff to look at the issue of converting the stadium’s natural grass to artificial turf, a topic not agendized but discussed previously with much concern. Although, turf will allow for more days of use, reports are finding that the costs in maintenance are high and more importantly, increase the risk of injury substantially. This topic will likely be agendized for a vote soon at a future meeting.

Now that OCSC can begin selling season tickets for the 2023 season, and fans are assured at least one more season, the behind-the-scenes negotiations for a long term deal enter a new phase. And it’s clear many will be watching.