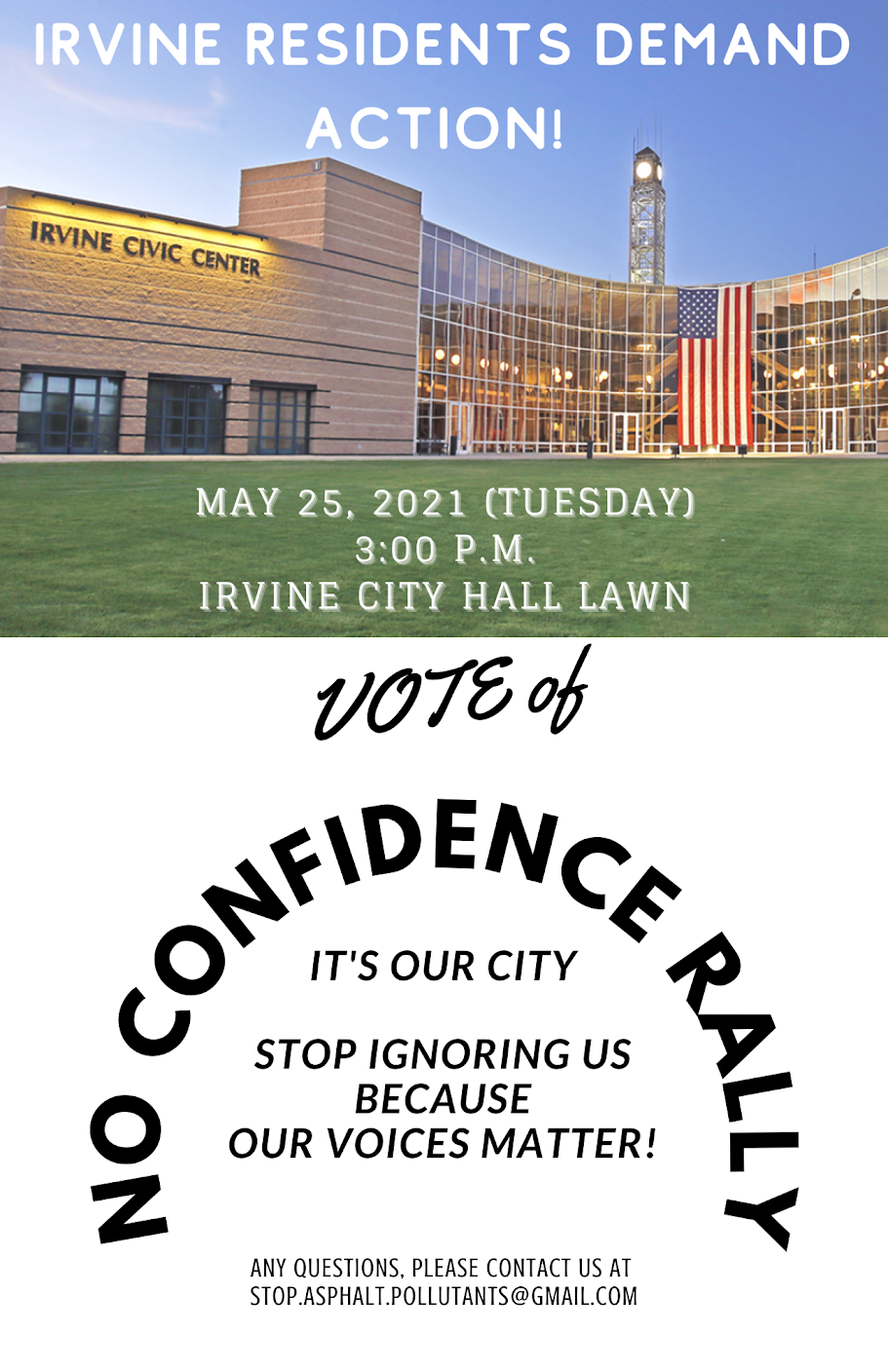 Irvine residents are mobilizing for a “Vote of No Confidence Rally” to call attention to their claim that there is a lack of city leadership on important community issues. The rally will be held on May 25, 2021 at 3:00PM at the lawn in front of City Hall, 1 Civic Center Plaza.

Participating groups say current Mayor Farrah Khan and City Councilmembers have silenced and ignored residents on more issues than all the prior City Council’s in the city’s 50 year history combined. This is due in large part to the city’s agenda-setting policy requiring two city councilmembers, or the mayor’s support, in order for any item to be placed on the public meeting agenda. This policy was made permanent by the current City Council in December 2020.

Among groups demanding action, the Stop Toxic Asphalt Pollutants (STAP) group is specifically demanding action from elected officials to protect the public​’s health​. They claim that based on the latest information that they have received from the California Air Resources Board (CARB), that the City of Irvine should have ​cause to revoke AAA’s business permit.

The groups claim that the City Council has denied the public’s requests for a public hearing on four notable issues despite campaign promises and hundreds of public comments:

STAP invited other groups from around the City to amplify the concern they have of not being heard by this City Council. They have received confirmation that the Great Park residents seeking a resident’s advisory committee and those wanting the veterans cemetery issue on the agenda will also be joining the rally. This is a non-partisan event.

Additionally, residents have been increasingly silenced and have stated concerns about e-comments no longer being read aloud during City Council meetings as well concerns about first amendment violations by cutting off public commenters during general public comments. The groups have been demanding action for months but have felt ignored and would like City Hall to open up with modifications.

STAP specifically said that lawsuits will take years, and they do not want children and residents in the area to be exposed to an unknown amount of toxins and carcinogens. Exposure can’t be undone and it’s cumulative.

The groups hope that among actions taken on the issues, that the Councilmembers will start taking the concerns of residents seriously, stop violating the First Amendment, the Brown Act, and the City Council Ordinance.