Op-Ed: Why Irvine Candidates Should Pledge Not to Accept Developer Campaign Contributions 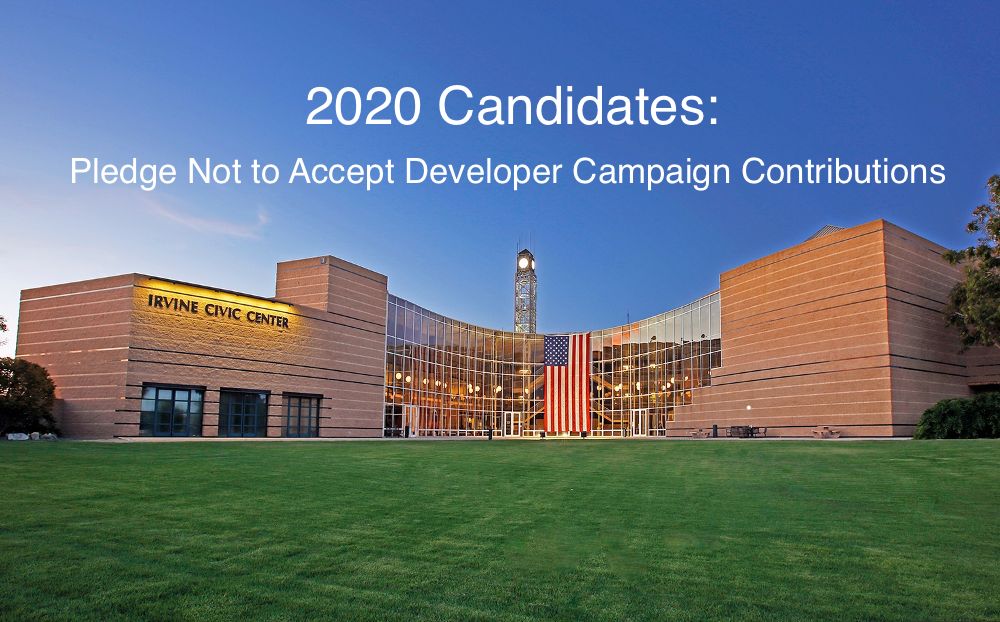 Candidates are already raising money to run for Irvine Mayor and two City Council seats. The election is November 3, 2020. A list of declared candidates and statements disclosing campaign contributions can be found here.

Will candidates for Irvine elective office pledge not to accept campaign contributions from developers and their proxies in the run-up to the 2020 elections?  Will voters demand it?

Public comments at Irvine City Council meetings and in social media suggest a deep and persistent mistrust of developer involvement with campaign finance. How is an elected official to say no to a developer that has helped fund their campaign?

Irvine Developers Have Done Much Good

We don’t feel developers in Irvine are bad. The Irvine Company has won global acclaim for its early master planning and ongoing support for the City. Indeed, it is hard to imagine Irvine having become one of the nation’s leading cities without Irvine Company’s deep involvement in its history. FivePoint, the other major developer in Irvine, is a relative newcomer. FivePoint has already attracted world-class business and investment and has built extensive state-of-the-art sports fields and other amenities at the Great Park.

Still, developers have enormous financial resources and an inherent interest in influencing City decisions. Developers spend tens or even hundreds of millions of dollars on projects and often take on significant financial risk. There is a strong temptation to intervene in elections as a matter of business strategy.

But when the public perceives developers are driving election outcomes, confidence in city government and elected officials quickly erodes.

Ryu’s proposal came after FBI agents raided the home and offices of Councilman Jose Huizar in November 2018. The FBI is probing possible bribery and kickbacks relating to development in downtown LA.

The Council had referred the proposal to the Ethics Commission, which recommended the City move forward. The Council has now unanimously approved a motion to institute it. The matter goes to city staff to draft versions of an ordinance to put into place. One version would apply to the LA Unified School District Board.

The ban appears to be on solid legal ground. Councilman Ryu posted a legal opinion obtained from outside counsel. In its report to the Council, the Ethics Commission cited legal precedent it felt gave the City power to enact the ban.

The Ethics Commission had harsh words about the interplay between elected officials and developers. “There is no question that the widespread perception is that there is a pay-to-play culture at Los Angeles City Hall, in which developers give money to elected officials…in an attempt to influence decisions about development projects and public policy…Actual corruption and widespread ethics violations are also associated with developers.” (Report, p. 4)

Irvine Candidates Should Pledge Not to Accept Developer Contributions

To be clear, this reporter is not aware of any ongoing investigations of developer campaign corruption in Irvine. But the City faces huge development decisions concerning the Great Park and elsewhere. Irvine elected officials must be free to think and act independently in the interest of the people of Irvine.

We urge each candidate in Irvine to pledge not to accept campaign contributions from developers and their proxies (such as developer-funded PACs and lobbyists) in the run-up to the Nov. 3, 2020 elections. We also urge major developers not to make such contributions.