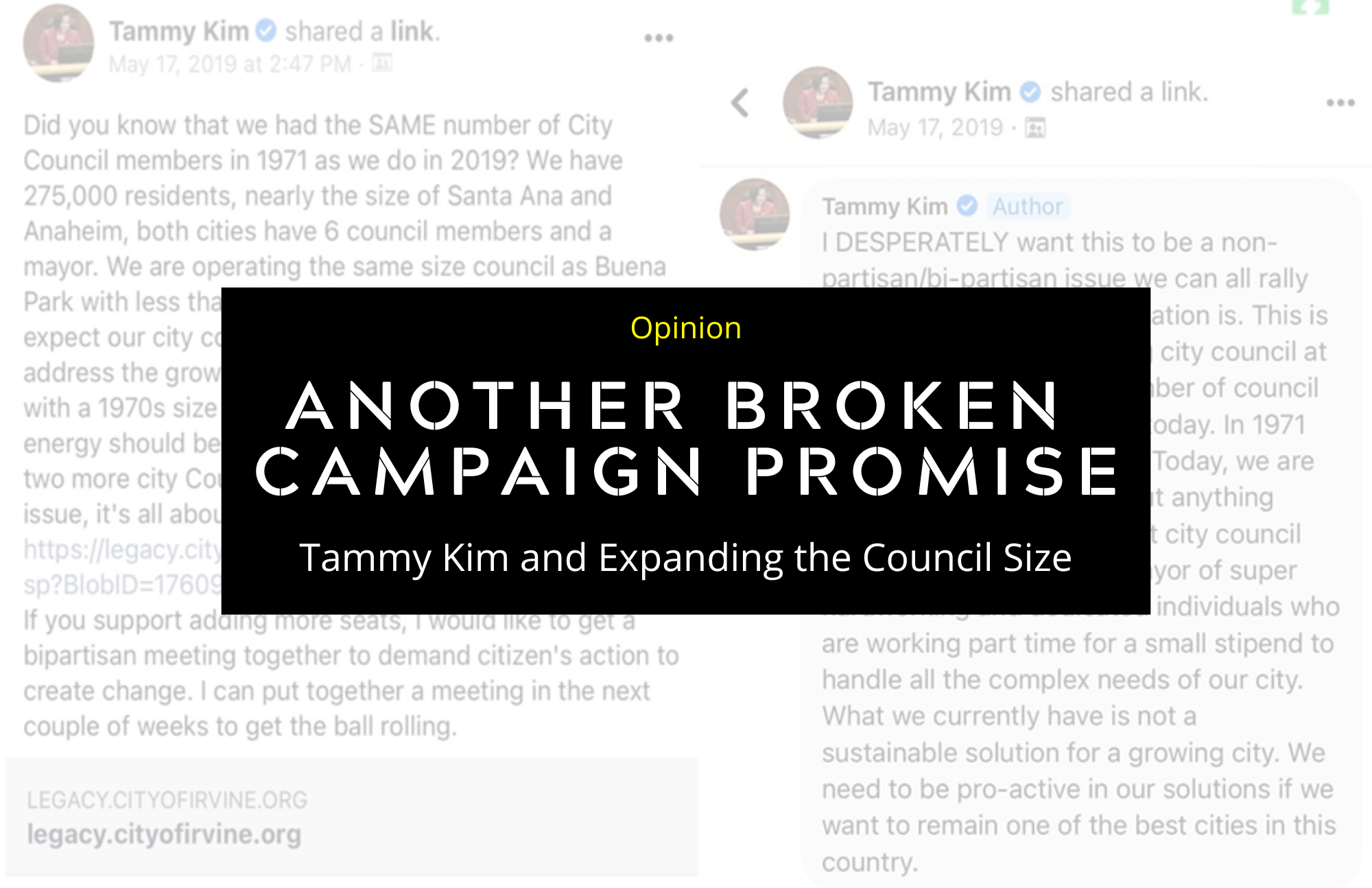 Irvine City Councilmember Tammy Kim once campaigned on expanding the size of City Council. Kim’s campaign platform highlighted efforts to support Veterans in Irvine, stop All American Asphalt pollution, and passionate pleas to expand the size of Council. She has failed at delivering on all three issues.

[For more background, read, Opinion: District Elections and Council Expansion Back on the Agenda. Will The Council Let the Voters Decide?]

In the two years since Kim joined the Irvine City Council, she not only failed to agendize expanding the size of the City Council, but she actively thwarted efforts by Councilmember Larry Agran to agendize changes to Irvine’s election system on two occasions by using draconian agenda setting policies to quell discussions.

Tuesday night, despite her 2020 campaign promise, Kim abruptly reversed course when she did not support Councilmember Larry Agran’s motion to place a charter amendment measure to expand the City Council size from five to seven members on the November 2022 ballot (to become effective in the 2024 elections).

This was a separate and distinct motion from Agran’s push for district elections which failed to garner enough votes, with only Mayor Farrah Khan in support. Khan voted with Agran knowing the three other Councilmembers were not in support of district elections, appeasing the Democratic Party of Orange County.

At the meeting, City Attorney Jeffrey Melching stated the deadline to place a charter amendment measure on the November 2022 ballot is this Friday through a special meeting. That means the council had to act immediately to meet this deadline.

Confusingly, Kim offered an amendment to Agran’s motion to expand the Council’s size by asking for a subcommittee to “study the issue”, effectively creating a delay so that the deadline to place the measure on the 2022 ballot expires. Kim stated that the expansion of the City Council “is way too important an issue to be rushed.”

Hours after the meeting, on social media, Kim defended her actions:

“I made it clear that I support expansion. I made a motion, and it was not accepted. Both our motions called for implementation in 2024, but mine would have allowed us to have more thought put into it and allow more residents to be educated on the topic rather than shoving something on the ballot and then having it fail.”

Kim received pushback from fellow residents, who explained that it would be impossible to form a committee and have them study the issue and create a report before Friday — a report only Kim asserts is necessary.

The intentions are apparent. And not just from Tammy Kim. Only two Councilmembers, Agran and Mayor Khan support a ballot measure giving Irvine voters the choice between status quo at-large elections or district voting. And now it appears only Agran supports giving voters the choice to expand the city council to increase badly needed representation in a rapidly growing city.

One can only speculate why the majority of the Council is so averse to district elections or expanding the size of the Council. Whatever the reason, the effect is leaving Irvine voters without a voice in a process meant to serve them.

Disclaimer: The views and opinions expressed in this article are those of the author and do not necessarily represent the position of Irvine Watchdog or any of its volunteers. If you would like to submit an Opinion article, please review our guidelines and send it to us here.“