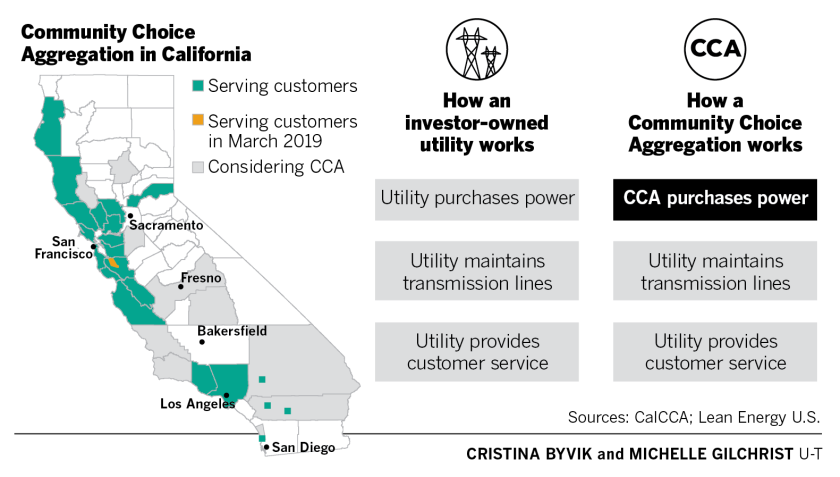 At the 8-19-2019 Finance Commission meeting, the commissioners readily agreed on the value of Irvine pursuing formation of a CCE, sometimes referred to as a CCA, to serve Irvine’s energy needs. However, the commissioners had a lengthy discussion before they could decide if they should recommend a standalone or Joint Powers Authority (JPA) version of a CCE to the Irvine city council.

The standalone option involves Irvine forming its own CCE. The JPA option involves cities/agencies banding together to form a CCE organization. Various versions of the JPA model exist,** but, in general, the standalone CCE would give Irvine more control in determining policies and structure. In the JPA model, Irvine would give up some control, but any financial risk would be shared by all participating cities and entities.

Commissioner Sievers (Councilmember Fox’s appointee) had a good understanding of CCE, perhaps due, in part, to his conversations with the CEO of a CCE in San Mateo County. The other three commissioners that were present are on a learning curve regarding CCEs. (Commissioner Dale Cheema, Councilmember Khan’s appointee, was absent.)

Support for the Standalone Model

Support for the JPA Model

The other three commissioners were adverse to any financial risk that the standalone option could have for Irvine due to not sharing the risk with other cities or agencies. Chair Shute (Mayor Shea’s appointee) was particularly concerned about the additional financial risk that a standalone option might involve. In addition, Shute was not comfortable with the upfront costs not being in the current budget.*** The staff report did state their were risks. However, the staff report also stated risk mitigation strategies exist. Staff also stated that financing options were available and did not seem to think that would be a problem. However, Mark Steuer of the Public Works Department did state staff’s preference for the JPA option.

Shute put forth a motion to recommend the city council direct a study of the JPA model for Irvine that could be operational by 2022. Shute also wanted the upfront costs to be included in Irvine’s next budget. Shute’s motion passed, 4 to 0 with Cheema absent.
Note: Due to Irvine’s two year budget cycle, the logistics of meeting a filing deadline for an operational CCE in 2022 while also including the upfront costs in Irvine’s next budget could be problematic.

Sylvia Walker spoke during the public comments and mentioned the JPA and standalone options. She urged the  Finance Commission to recommend the standalone option to the city council. Margo Finlayson read a letter from Irvine resident Patty Yoo. The letter was in support of pursuing a CCE for Irvine.

Now or Later? The City of Innovation Must Make a Decision

“As a ‘City of Innovation,’ Irvine is attractive to both residents and businesses. Irvine’s strategic approach to planning has made it one of America s premier cities, with the City well positioned to embrace future opportunities.”— Irvine Strategic Plan for Economic Development, December 2014

Any endeavor involves a certain amount of risk combined with the possibility of rewards. The trick is to find that sweet spot of taking on the right amount of risk to receive the maximum rewards. That will be the issue that Irvine, The City of Innovation, will consider when it decides whether to go with the standalone CCE model or some version of the JPA model. This item is schedule for the September 24, 2019 Irvine city council meeting.

**The following JPA governance options are available for City consideration:

***The following slides from the 8-19-2019 Finance Commission meeting show the projected revenue, potential savings to residents and businesses, and projected upfront costs for the standalone option. Note that the $10.05 million in upfront costs can be financed; however, a funding source for the $600,000 has not been identified yet.  Also, note that in addition to the potential energy cost savings for residents and businesses, the City of Irvine could use the anticipated $10.6 million in net income to create energy saving programs that benefit the public.